After being disabled more than a year ago due to security issues that led to the theft of confidential taxpayer information, resulting in countless identity theft cases, the IRS has finally announced the relaunch of the online transcript retrieval system called “IRS Get Transcript Online.” The IRS has beefed up the electronic authentication process used in granting taxpayer access to the online system. In order to access the system, users will now have to go through a two-step authentication process in which an email or text message is generated by the system to provide one-time access credentials to the user.

Commissioner John Koskinen said that “[w]e recognize that enhanced security will increase the challenge for taxpayers accessing our on-line services.” In other words, getting access is going to be a pain in the rear end for many people, perhaps similar to the online installment agreement application tool, which only results in successful authentication approximately one out of every ten attempts. In addition, if you previously registered to use the online transcript access tool, you will need to re-register for the new system. Requirements for successfully accessing the new system are available in IRS Fact Sheet 2016-20 .

One of the big “secrets” of tax controversy practice is access to IRS records using the “e-services” portal available to enrolled practitioners, but not available to taxpayers. IRS transcripts provide a wealth of information about taxpayers’ accounts, including balances, a record of IRS actions, a record of taxpayer actions, lists of information returns (Forms W-2, 1099, 1098, etc.) reported to the IRS, and even line-by-line transcripts of tax returns filed by taxpayers. Such information is critical to identifying taxpayer problems, formulating solutions, and for monitoring IRS activity on a case. The ability to access IRS transcripts is critical to empowering taxpayers who have troubles with the IRS. As G.I. Joe said, “knowing is half the battle.” When it comes to IRS problems, getting transcripts is often half the battle. 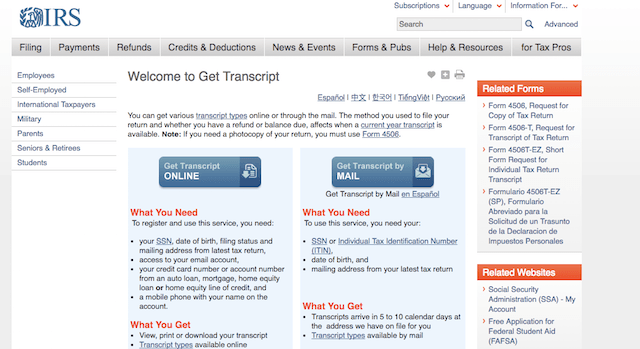